Kate Moran, president and CEO of the UVic initiative Ocean Networks Canada (ONC), was awarded $2.4 million toward a $6.1 million project to build an observatory in the Northern Cascadia subduction zone that aims to provide critical information on seismic and tsunami risks in BC.

The Northern Cascadia Subduction Zone Observatory would be operated on ONC’s offshore NEPTUNE observatory, a cabled ocean observatory off Canada’s west coast that crosses the major fault zone between two converging tectonic plates. The proposed observatory seeks to equip scientists with the tools and data needed for comprehensive studies of the tectonic plates – massive portions of the Earth’s crust – that meet in the Cascadia zone, and whose movements trigger earthquakes and tsunamis.

Even a few years of data from the observatory could provide critically important information on tectonic plate movements where it matters most – in the ocean where the plates collide. “This new marine geodesy technology is a breakthrough for advancing our knowledge of mega-thrust earthquakes,” says Moran.

Ocean Networks Canada (ONC) has designed a system that utilizes the Wave Glider, an ASV manufactured by Liquid Robotics to gather and transmit data collected by Sonardyne ‘nodes’.

Liquid Robotic’s Wave Glider equipped with acoustic sensors that communicate directly with Sonardyne ‘Nodes’ placed along the Cascadian Subduction Zone will transmit real time acoustic data which will be fetched as the Wave glider passes within proximity of each node. The data collected by the Nodes will then be accessible by the Oceans 2.0 data management system via iridium satellite connections available through ROMOR. 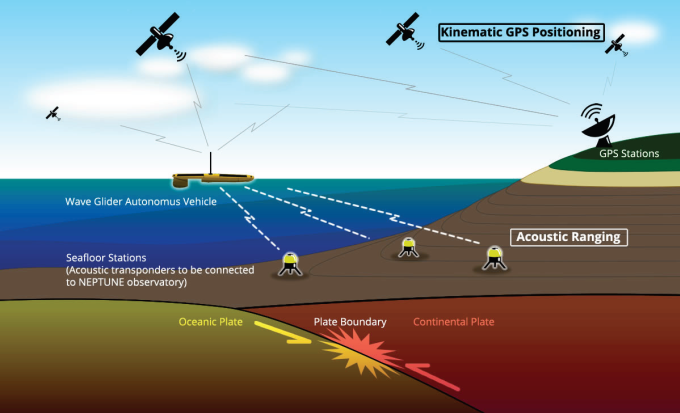